Rain in The Big Easy

June 1, 2014 In Street Photography Tips & Tricks Where Is Rain

Rain in The Big Easy

June 1, 2014 In Street Photography Tips & Tricks Where Is Rain 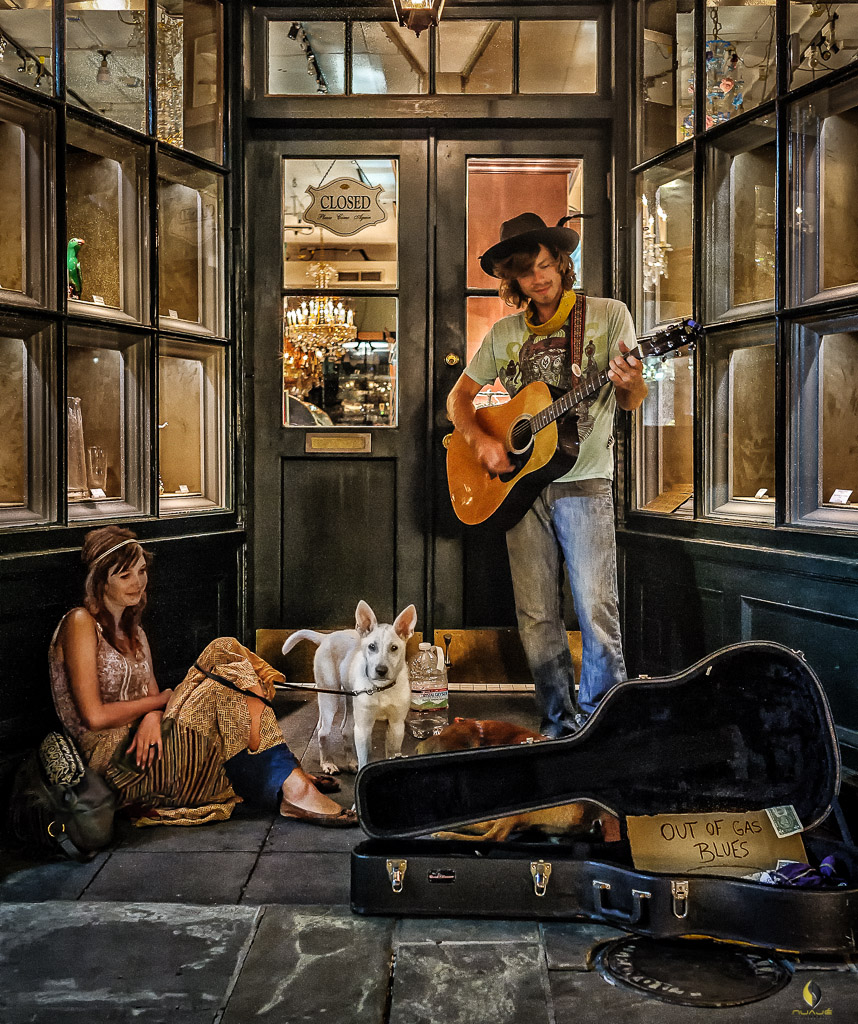 “Bring the Family to Work” Night

This is Part I of a 3 Part posting on my recent photo adventures in New Orleans, LA. On this particular evening, after a fantastic dinner at Ralph and Kacoo’s (see images below), I hit the streets of the French Quarter.

First, let’s get the techie stuff out the way. I shot with a Nikon D700 with an inexpensive 35mm prime lens. All of these images were shot at around ISO 2000, aperture 2.8 to 4. All the images were hand-held (even the panoramic at Champion Square) at a shutter speed of approximately 1/50 seconds. Because of the short focal length, I can use a slower shutter speed to let in more light and still minimize blur. Remember the rule: in order to minimize blur caused by camera shake, the shutter speed should be no more than 1/focal length (35mm is good for a shutter speed of about 1/35seconds).

Ok, now onto the good stuff.

The first image (above) is one of my all time favorites, and I almost passed on the opportunity to capture it. I was walking along taking, what I believed to be, uninspiring images of the New Orleans night life. I lazily glanced at the guitarist playing in a little alcove, and kept walking. As I passed the scene, my mind started catching-up to all the information my eyes had fed it , and I soon realized that a great story was mine for the taking. The struggling musician, a supportive girlfriend, 2 dogs (yes there’s 2 dogs), and a jug of water — already perfectly composed in a manner that  engages the viewer’s eyes to wander around the frame. 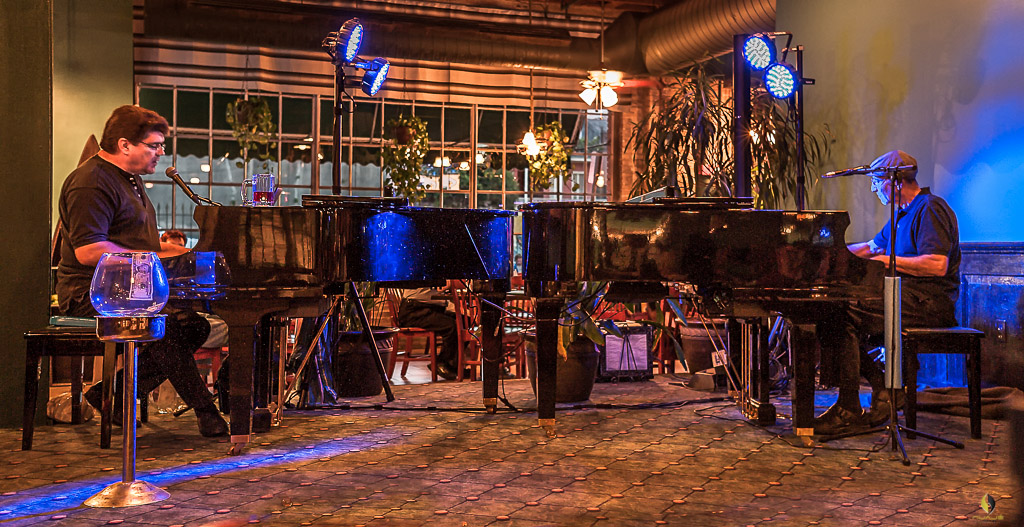 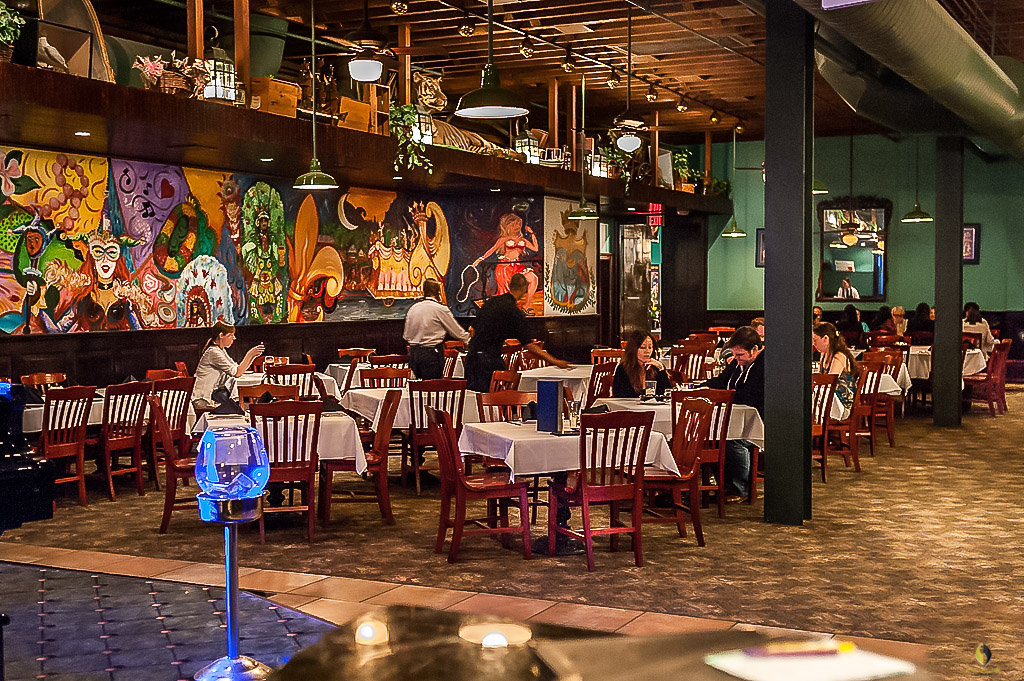 Dining Room at Ralph and Kacoos

The crowds, the color, the character — I call it the 3Cs of the Big Easy (Rain original: I expect royalties every time that term is used). 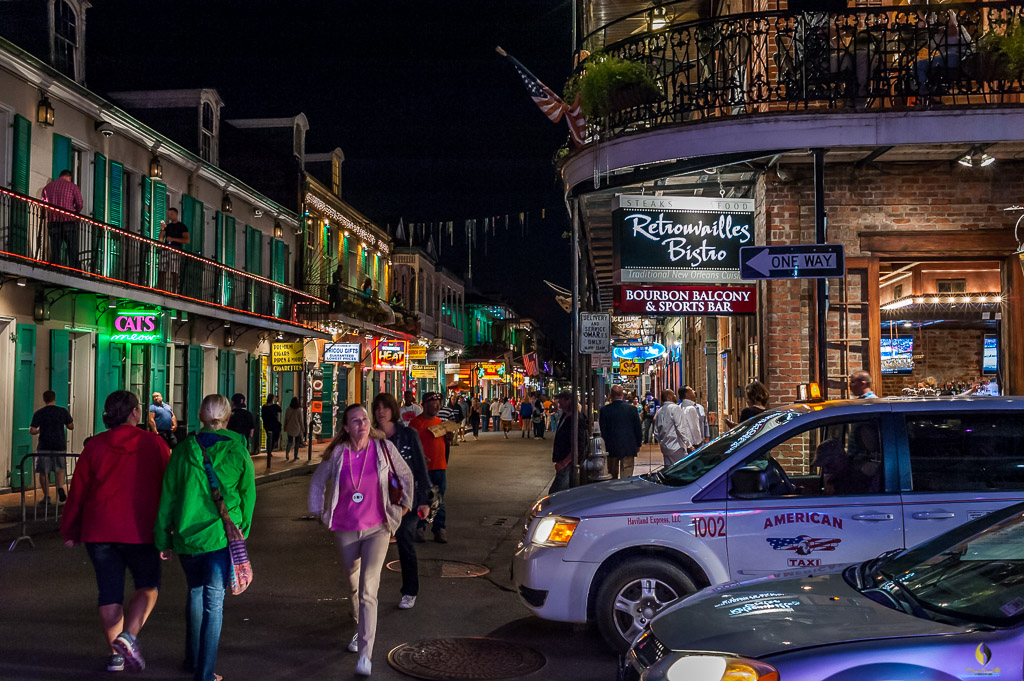 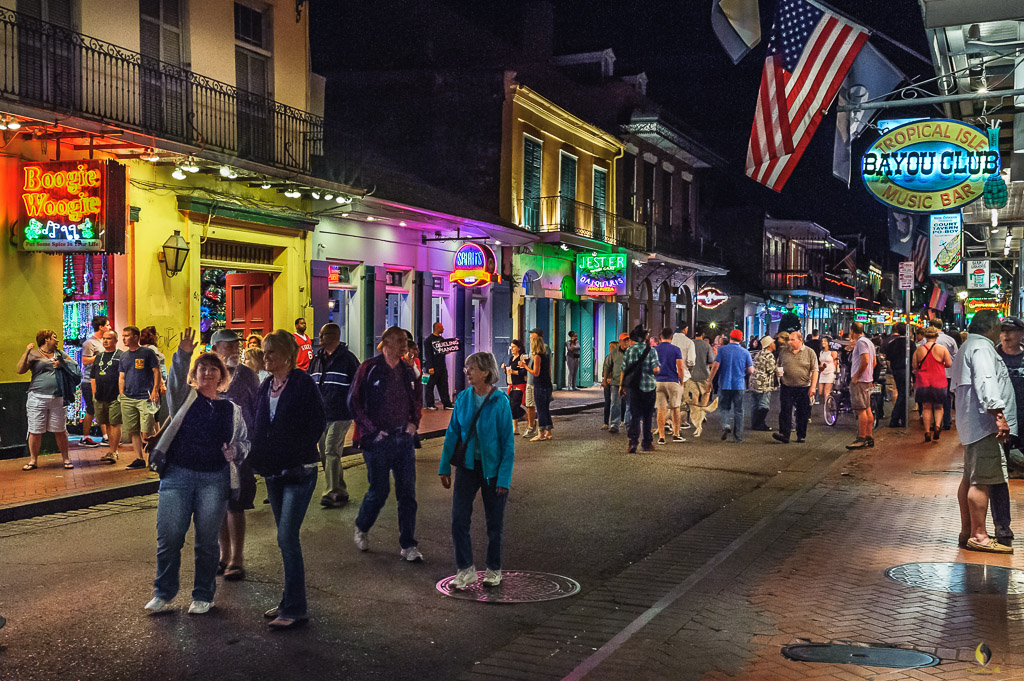 Happy People of the French Quarter 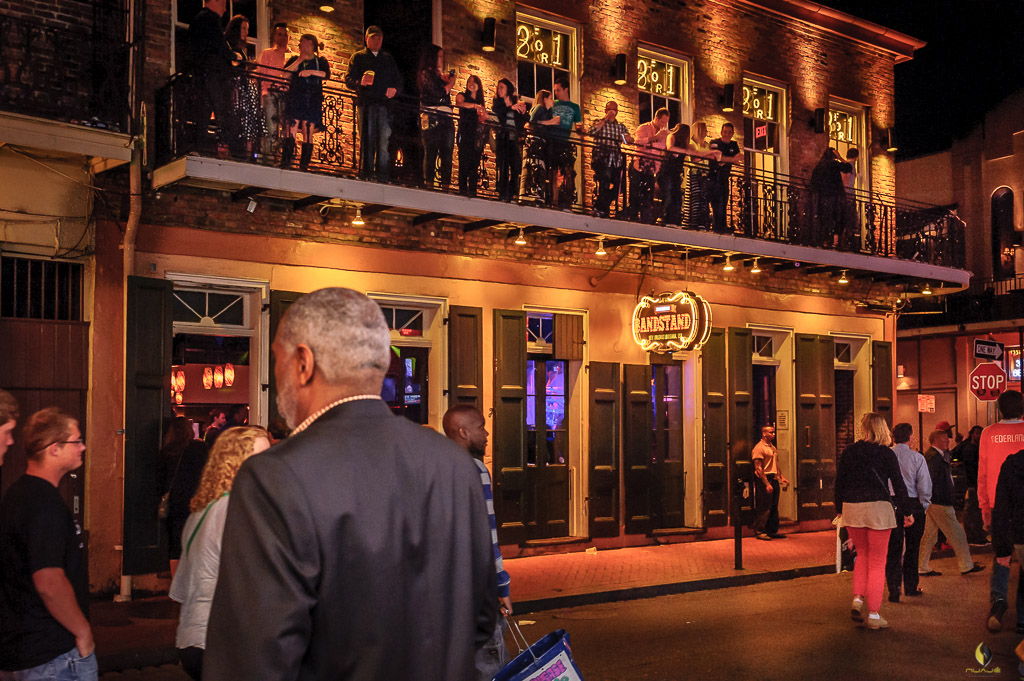 On a separate night, I attended an outing in Champion Square, and was lucky enough to capture a pretty intimate shot of the Mercedes-Benz Super Dome (home of the New Orleans Saints). It looks like I have the whole place to myself, but in essence, there are people milling all around my frame of view. Fortunately, in dim light situations and with longer shutter speeds, moving objects (like people stumbling in front of me while I’m trying to take a picture),  tend to become “ghosts” in the final image.

If you look closely, you can see some shady character lurking in the shadows by the sign. 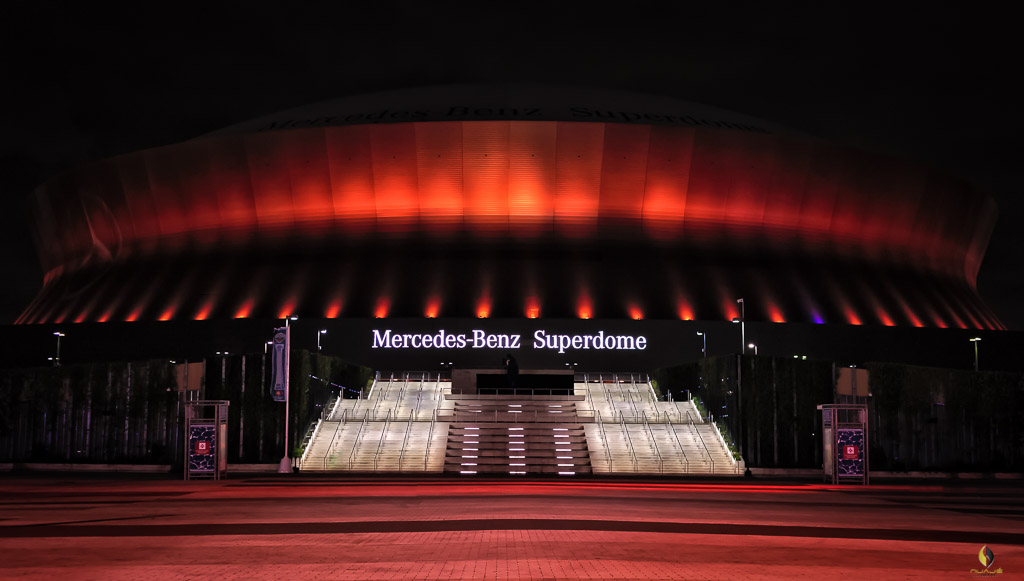 Finally, a hand-held panoramic of Champion Square. This is actually 6 separate images stitched together in post-production to achieve what appears to be a super wide shot.

Stay tuned for more adventures in Louisiana. One outing features a lingerie model on the rooftop of one of New Orleans’ more celebrated historic hotels. Oh, and another photo session in which I was warned to look out for snakes and alligators. 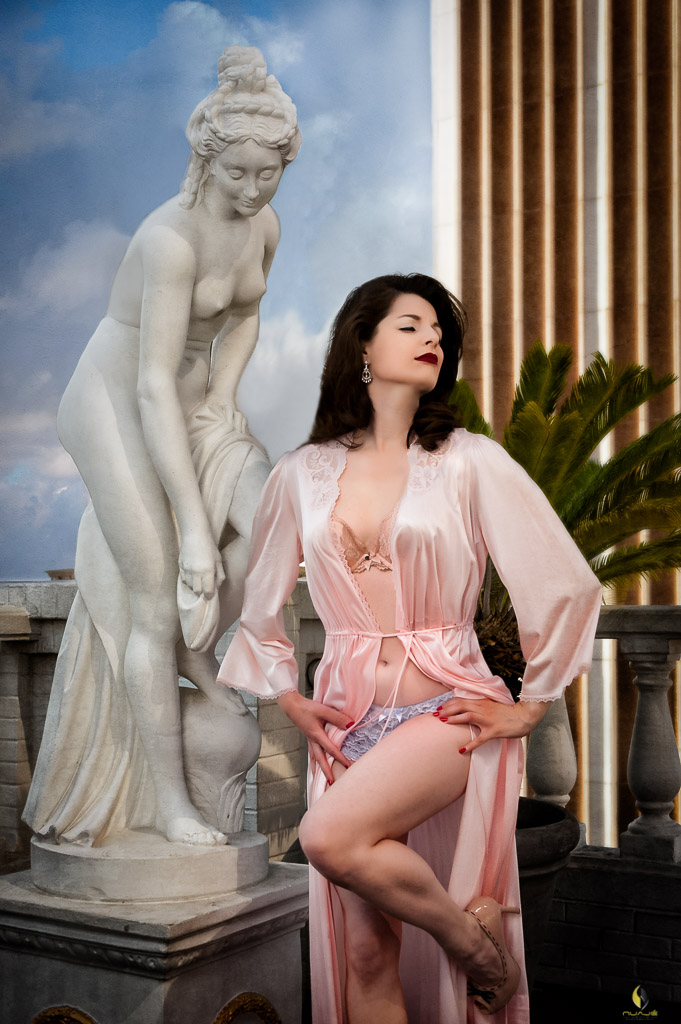 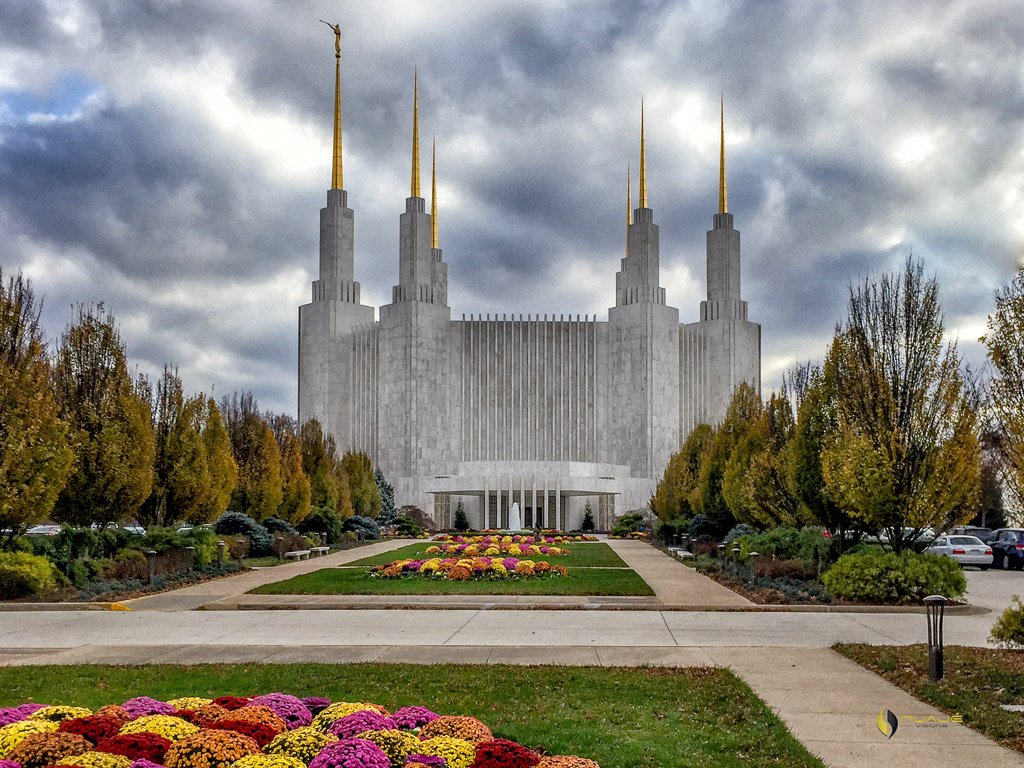